In a city populated by purse dogs, Matt Meeker found New York’s pet stores to be lacking in products for Hugo, his energetic, 100-lb. Great Dane puppy. “I
was very obsessed with spoiling him,” Meeker says, but finding toys and treats for a dog of Hugo’s size wasn’t easy. 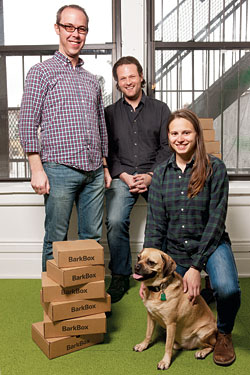 Starting BarkBox–a subscription-based service that delivers boxes of goodies to dogs and their owners once a month–was Meeker’s solution. He let other dog-lovers in on it too–thousands of others, in fact. Meeker co-founded BarkBox with Henrik Werdelin and Carly Strife, both veterans of the startup scene, and the service launched in early 2012.

“We just wanted to help dog parents who are obsessed with their dogs discover the newest toys and treats and bones for their dogs and provide it to them on a monthly basis,” Meeker says.
In a little under a year, the company has amassed more than 20,000 customers, Meeker says. And, event better, Meeker says the company has managed to retain them at a steady rate of 93 to 95 percent for the first year.

In fact, one of their biggest problems has been underestimating growth. “We had a stretch goal and we raised the money in June of this year,” Meeker says. “The story we were telling the investors was that our goal for the year was to end with 8,000 customers, and the stretch goal was 10,000. And we really thought 10,000 was not possible.” But they’ve doubled that, and now they’re concentrating on building a fun, edgy, irreverent and sometimes inappropriate brand, he says.

“We don’t call anything marketing,” Meeker says. “We call it customer acquisition or brand building, so we’ve put a lot of emphasis on both. We’ve taken a lot of time to be thoughtful about our brand and create a narrative around it.”
At the heart of BarkBox is the idea that a dog is a member of the family. “We talk a lot about how our customers are dog parents,” Meeker says. “We see that everywhere. We see that with the people we interact with on Facebook, commenting on everything we post, and people who write in or call in to support with questions. They all fall into this profile for sure.”

Because BarkBox knows its customer base–women with disposable incomes, they tend to be 25-to 35-year-old professionals with no children, or 45- to 55-year old empty nesters–its founders have been able to tailor the business to their audience’s wants and needs, and interact with them in as many ways as possible.

“Our approach there over 2012 has been to try as many things as we can as fast as we can and see what works,” Meeker says. “And when we find channels that work, we go very heavy on those.”

For example, deal sites like Groupon and Fab have proved to be effective for bringing in big groups of customers to BarkBox over a short period of time, and the company’s referral program is popular too. Customers earn a free box for every new subscriber they refer. “We actually have one woman who has now earned over 24 years of free BarkBox,” he says. “She’ll be with us for awhile.”

Sometimes they’re surprised at what works. “One thing we kinda stumbled into is people love to do these unboxings and put it on YouTube,” Meeker says. The Internet is filled with home videos of happy customers gleefully describing the contents of this month’s BarkBox while their dogs nose through the toys and treats. “They actually translate really well into new people discovering it and purchasing, and so now we’re a little more systematic about identifying people who do that.”

The team recently launched a BarkBox mobile app, which allows customers to review and reorder products, as well as check the status of their boxes. “But you really can’t do much with it unless you’re a subscriber,” Meeker says. “So it’s to add more value there, to give people one more way of discovering the brand and interacting with it.”

On the other hand, they focus their energy where it matters. When their retargeting service wasn’t bringing them the results they wanted (“We were spending hundreds of dollars per customer,” Meeker says), they opted to switch to SharpSpring Ads’s services, which has been “super, super successful,” he says.

That includes focusing their energy on certain groups of subscribers too. Customers can purchase monthly, quarterly or half-year subscriptions, with the half-year plan being the best value. Only three percent of customers purchase the monthly package, which is the most expensive, and if they don’t renew, they aren’t chased down. “We actually don’t put a lot of emphasis on reaching out to them and trying to move them into a different plan because it’s such a small group,” Meeker says. Because retention rates for other packages are so high, it’s not worth the time for a small team.

In the future, Meeker and the BarkBox team plan on expanding the products and services they offer. Currently three varieties of boxes go out each month: Ones for small, medium and large dogs. Meeker said he hopes to address dogs’ needs not just based on size, but in categories like age, geography and behavior. Next year, six varieties of boxes will be sent out in January, 12 will go out in February, and in March they’ll expand to 18. Year-long subscriptions are on their way too.

But behind everything, BarkBox’s commitment is to its subscribers, and–especially–to dogs. Ten percent of every subscription goes to a shelter or rescue.

“It’s really not a technology company,” Meeker says. “We think of it as a brand company, where it’s a brand serving a particular audience of people and doing that every which way possible into the future.”

Do you have a fascinating story to tell about how you acquired your first customers or radically changed how you reach new customers now? Or maybe you had an epiphany from customer feedback that pushed your product in an exciting direction? We want to hear about it and tell others! E-mail me at ads@sharpspring.com.

Scott is the Customer Success Manager at Perfect Audience. He holds a degree from Illinois State University and has over 13 years experience working in the customer service/tech support field.
Post categories: Articles
Post tagged with:
Next Post →


The easiest way to retarget lost customers across Facebook.


Set up dynamic retargeting for your Shopify store in minutes.


Get more sales for your online store. Bring browsers back with a product-specific ad.


Harnessing the power of Twitter ads with your existing audiences.


Team up with marketers to retarget each other’s visitors and acquire new customers.


Retargeting keeps them coming back for more.


Set your own campaign budgets and spend as much or as little as you like!
e

Learn how to optimize and scale programs with a cross-channel, multi-device approach.


Helping our customers run a better business every day, our success is directly linked to our customers’ success.